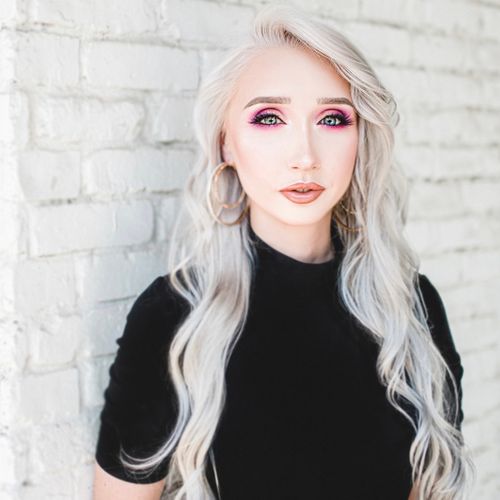 When you visit Urban Betty, you’ll immediately recognize Savannah with her signature white hair, killer nails, and extravagant lashes and makeup. Savannah was born and raised in Seattle, Washington where her infatuation with the beauty industry began. After high school she moved to California for college, but realized that she wasn’t happy after her first year and moved to Los Angeles to begin attending the Aveda Institute Los Angeles, graduating in 2016. Immediately after earning her Cosmetology License, she moved to Austin, Texas and began attending the University of Texas at Austin where she graduated from in 2019 with a B.A. in Rhetoric and Writing and Creative Writing. Feeling stuck searching for a meaningful job after college, she realized she wanted to go back to what she loves: creating beauty through hair and makeup.

Savannah loves creating bold, statement making hair. Do you want to leave the salon looking and feeling like a new person? Then Savannah is the stylist for you! She’s a bleach queen; specializing in fashion colors, bleach and tones, balayage, and color corrections. She is often seen working on her signature “transformation projects” where she carves out entire days to give guests the hair of their dreams. Savannah is also certified in several extension methods including beaded wefts, tape-ins, micro bead, and fusion extensions often cocktailing them together to give her guests individualized customization and the hair they’ve always dreamed about.

When she’s not making dreams come true, Savannah can be found either reading or writing horror novels while drinking a Dr. Pepper and surrounded by her five dogs. When she’s out of the house she’s usually at the nearest Alamo Drafthouse watching the latest thriller or dining at one of Austin’s local eateries – usually eating the most indulgent thing on the menu.