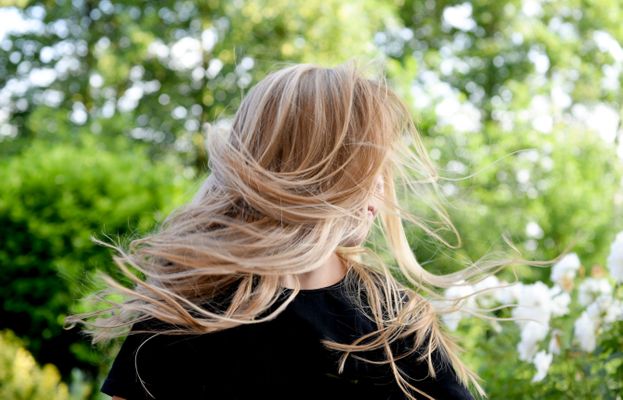 Why To Take It Slow When You're Going Blonde Part 1

It's official, the "white hair" trend is still in full swing. Strap in for a lengthy read! I've dug deep into the scientific explanation of what goes on when going from a natural level 1-2 rich, brown or black, tone of hair to the dreamy, pearlescent level 12 platinum that you see in the media today.

In order to understand how the hair is impacted throughout the lightening process, we first need to know what the hair is made up of. Let’s talk about the structure of hair.

While everyone has different ratios of layering in their hair, we generally have three layers to our hair shaft: the cuticle, the cortex, and the medulla.

The cuticle is the outer layer. The cuticle is a hard and resistant protein layer compared to the soft, elastic layer of the cortex. In very dark hair, the cuticle may contain melanin (hair pigment). Regardless if the cuticle has pigment or not, it’s always affected by bleach.

Microscopically, a normal cuticle layer has the appearance of shingles on a roof, like multiple scales stacked flat on top of each other. During a lightening service, the cuticle is altered to open these scales, which allows the product to penetrate the cortex. If the lightening process is rushed or if the lightener is left on too long, it could permanently break off the cuticle scales, leaving the cortex vulnerable.

The cortex contains the majority of melanin (hair pigment). Since color change primarily occurs in the cortex layer, if you have a very thick cuticle layer, it may take longer for color change to happen because it’s harder for the color to penetrate.

The cortex or middle layer has chains of protein formed by amino acids, which give the hair its strength and elasticity. These acids are linked together by peptide bonds. Decolorizers (bleach) break some of these bonds in the cortex of the hair. In the decolorizing process, as much as 15 - 20% of the bonds are permanently broken. The longer a bleach mixture remains in contact with the hair, and the higher the pH, the higher the percentage of broken bonds. The destruction of the bonds leads to the production of a new molecule called cysteic acid, which produces hair that is weak, easily broken, and "gummy" or stretchy when wet.

The medulla, which isn’t always present in hair, is the innermost layer running down the middle of the hair shaft. In humans, it has no known function.

While the hair is primarily made up of 70-80% proteins, its remaining composition is as follows:

When we are coloring hair, we’re only aiming to alter the pigment (color). Can you believe all the time, money, and work we put into color, and only 1% is what we aim to alter?

Now that we know what the hair is made of, let’s break down further into the products used and the microscopic chemical journey to obtain those pearly platinum locks!

Effects of Decolorizers on Hair

The most effective way to lighten hair is through a decolorizer (lightener/bleach). There are three general classifications of decolorizers used in the salon: oil, cream, and powder. While each one is used for a specific function, such as root refreshes, balayages, and dramatic transformations, they all affect and damage the hair in similar ways.

When we decolorize the hair the bleaching product breaks the pigment, creating a lighter appearance of the pigment molecules. It is more effective to take it slow when we lift hair because the color molecules are able to break into smaller pieces, which allows the lightening product to work through the hair shaft easier. When the lightening process is rushed, the color molecules are fragmented too fast, resulting in them breaking unevenly and in larger pieces, which ultimately creates a brassier tone.

It's much easier to slowly push a flattened hand in a jar of fine sand versus shoving your fist through a jar of large marbles.

The sand is what happens when you slowly lighten the hair in multiple sessions over time.

The marbles is what happens when the lightening process is rushed. It’s nearly impossible to reach all the way through to the bottom of the jar; it’s a rigid and rough process.

Below is a picture of the "blonde goal" that many clients want to achieve when they're going blonde. 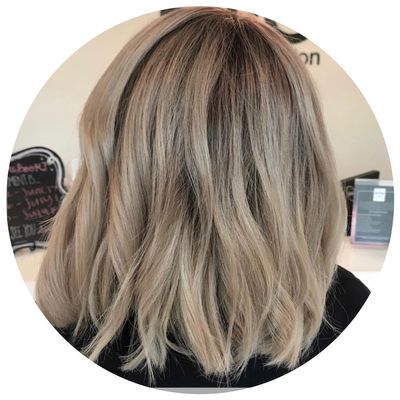 And, this next picture is the reality after one lightening session when starting with very dark hair. 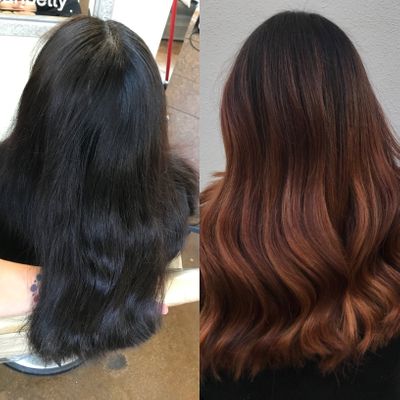 So, when your stylist advises your hair need more than just one session to achieve your desired blonde, it’s because we are trying to protect the longevity of the results as well as the health of your hair. Stay tuned for part two, where I walk through specific examples that stylists encounter when lightening hair.